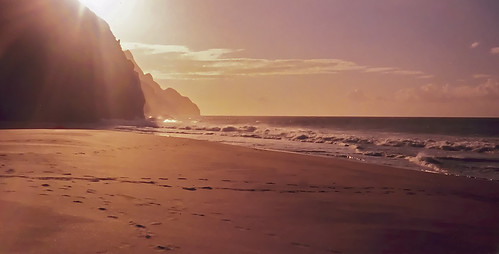 Most photgraphic adventures probably don't start out with a story about a woman, but this one will. I met Kristi at Theatrikos Theatre Company in Flagstaff, where she was working as the box office manager. I had been volunteering there for many years before, and had recently returned from a four year hiatus. After graduating from NAU school of performing arts, I had to get a job in the real world, but I missed the theatre. I met the executive director of the Theatrikos at the Zane Gray Ballroom, a bar upstairs in the Weatherford Hotel in downtown Flagstaff. We immediately hit it off, and shortly after I became the resident sound designer.

I was cast in some plays, and became heavily involved in a rennovation project in the basement, building much needed dressing rooms. Kristi Long wanted to help build. My Dad, Johnathan, Kristi and I worked toghether for a few months. I began to notice and appreciate Kristi for her qualities, and attractiveness. Shortly after I was elected President of the Board of Directors, and became even more heavily involved in the theatre. A mutual freind, Sara Brecht, at some point thought we would make a great couple and decided to play matchmaker. She said to me; "I think Kristi likes you. You should ask her out." She said to Kristi; "I think he likes you, you should go out with him." Well, I did, and she did. We both dated a couple of months and (here it comes) she invited me to go with her to Hawaii to meet up with her brother. She warned me the major part of the trip would be hiking the Na Pali Coast's Kalalau Trail. 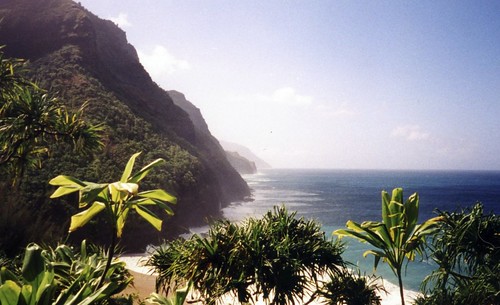 I was no stranger to backpacking, as I was a Boy Scout, and kept backpacking through college with my good friend Rich Hoffman. Even though we bought the plane tickets at separate times, we managed to get the same flight out of Phoenix. I was able to sit next to her on the flight by trading seats with another passenger, saying to them we were on our honeymoon. He he. We arrived in Honalulu, and had to switch carriers to get to the island of Kauaii.Somehow Kristi had a first class seat on this empty plane, so she got to sit in the front row and drink free alcohol. I had to sit directly behind her and be content to eat dry peanuts. We met up with her brother at thier dad's time share, and went out for Chinese food with a Hawaiian twist (ala pork and pineapple) for dinner. I realize this is turning out to be a memorir, but with out content, there really is no blog. Plus it's always nice to have something to look back and read about what I did ten years ago. Anyway we packed up our backpacks, rented some snorkeling gear (which we never did use on the hike) and set out in the rental car to the trail head. If you have never been to Kauaii, you wouldn't know that on this island the road doesnt circumnavigate the island. The road ends abruptly at the trail head, since the terrain becomes increasingly rough. By rough I mean it is reduced to giant steep hills that differ hundreds of feet in elevation, right along the coast line. 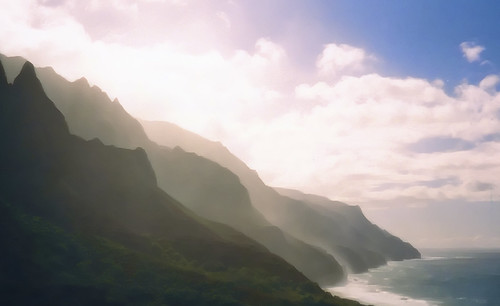 It's these hills that make it most interesting both for the hiker and photographer. The parking lot was not more than a grassy field populated by homeless chickens. Yes chickens. Aparently the chickens have escaped their barnyard due to the many hurricanes that hit the island, setting them free. The hike began as most hikes, and we made it to Ke'e beach (2 mi) without much trouble. The beach is a popular day hike for most tourists, and once you've left the beach they begin to thin out. Plus the trail immediately switch backs up about 800 feet. We kept hiking for four more miles through the jungle. We pitched camp at what we called the "Mosquito Camp," and had dinner. I think the mosquitos had more to eat than we did. The next day, the weather dried out a bit, and we were blessed with sweeping views up the coastline. The trail continued up and down, along cliff faces, and through valleys. The video I made does a better job conveying the harrowing trail looming over the crashing surf than I can describe: We spent the next couple of days at Kalalau beach, exploring the various waterfalls, and camping
We went in the winter, during the highest surf and strongest riptide season, so we didn't get much snorkeling in. Actually we didn't get any snorkeling in. We packed the kit we rented in and out, for nothing. At least the camera and video camera were put to good use. I'm all for stripping down and bathing in large pools, or sitting in hotsprings, but I wouldn't consider my self a nudist. There were nudists there that refused to compromise thier tan by wearing so much as a hat. We called him naked man. He was friendly, and hairless, and very tan. He apparently had no problem interacting with other campers, and was perfectly comfortable ingaging in conversation. I guess if he was comfortable, we would have to be comfortable. You know the type. There is always a naked man at these far reaching locales. I have yet to see a naked woman with such brazen conviction. Anyway we had to start heading back. Kristi's brother Kevin, and his girlfriend Chrissy had a little more time and stayed a few more nights, but we moved on. The return trip ended the first night at a camp we called "Cliff Camp." We had a choice of camping on a flat spot right on the edge of a cliff. There were some other campers close by at an adjoining cliff camp spot. We started to pitch our tent, then the heavens opened and began a deluge. We could see the cloudless sky and blue water just a few hundred feet off shore, but the rain comes from inland and swirls down off the mountain tops drenching to just off the shoreline. We quickly struck camp and headed for the protection of the jungle.

The canopy only gave us a few minutes to get the tent up and tarp over the tent before it flowed like tiny creeks on the ground. We cooked dinner under the tarp that we made into a make shift vestibule. Even though it was raining it never really cooled off. Damp and tired we fell asleep with the rain pounding the top of the tent. About midnight we heard some rustling of pots and pans outside. A half an hour later we heard it again, then some scuffling inside the tent. Just about that time Kristi woke up with a giant rat scampering on top of her and over me. We were all shocked, rat included. We zipped up the tent after that. The rest of the trip was relatively dry. Some other interesting event that happened on the trail was when we saw drips of blood. We followed the blood trail for a half an hour and thought somebody was in bad shape. We came upon a girl who was crying and holding her nose. We asked if she needed help, and what happened. Apparently she slipped and landed nose first on a yucca spine, which went up her nose and peirced her sinus lining. Yikes. Not much first aid we could render there. She just asked us if we saw her friends to let them know she'd be delayed. We finished the remainder of the hike, took some photos at the end and continued back to the hotel high on life. This was our first epic hike together and quickly we became closely bonded. This was ten years ago in November of 2000. We were to have many more adventures and many more critters in the tent. Shortly after this trip I got a digital camera, and my 35mm gear went into hiding for a while.
Posted by Wade Thorson at 10:09 AM