"I almost never set out to photograph a landscape, nor do I think of my camera as a means of recording.... My first thought is always of light." -Galen Rowell 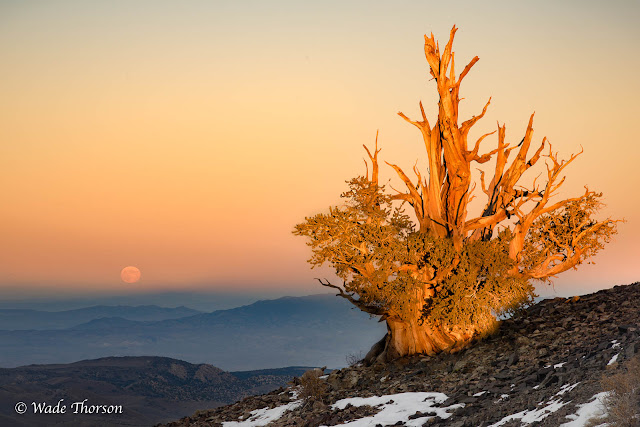 I had been to the Eastern Sierras a couple of times before, but I decide to attend a Jack Graham workshop because we were to explore many areas that I had not previously visited. We spent a bit of time in the footsteps of the great Galen Rowell, with whom Jack Graham had studied with.  A world traveler and mountaineer, Galen Rowell used his camera to capture the adventure and natural optical phenomena of the so called 'dynamic landscape.'  The Sierras were his stomping grounds, and Bishop is where he chose his home. Although the list of Rowell's mountaineering accomplishments is quite long, it is his writing and photography that endures today as his legacy. Unfortunately he lost his life in a tragically ironic plane crash within sight of his home.  His gallery Mountain Light still remains in Bishop, and showcases many of his images from California to Tibet.  It was here that we got a glimpse of what vistas and subjects we would be visiting. One such subject was located in the Bristlecone Pine forest of the White Mountain region of the Eastern Sierras. Our group was delivered to the top of a mountain ridge well before sunset.
We were set free to analyze the terrain and become intimate with the ancient forest. As the sunset began to creep up on us we were to reconvene closer to our vehicles.  It was then that Jack pointed out a beautiful specimen, calling it Galen's tree. I didn't get an exact answer why it was so called, but it became clear it was out of reverence and a tribute to the land he loved and photographed with passion.  Sunset was approaching and the light was getting interesting. I had been keenly aware of the moon phases on this trip, and had been studying it's light and timing since my arrival in the Sierras.  I had a feeling it was going to rise coinciding with the sun's setting.  I had written before about an iPhone app called Star Tracker.  Not only does it track and identify the stars, it tracks the sun and moon, and their exact positions in the sky.  I could see on the screen that just below the horizon the moon was about to rise.  While the others were focused on their own work, I positioned myself and set up my camera to capture the event.  I used a long focal length to condense the scene, and make the moon's size more prevalent.  I was getting a little nervous, because I was loosing the warm light on the bottom of the tree.  Then the moon presented itself. Just as it rose over the earth's shadow, the sun dipped below a distant mountain, casting a diagonal shadow along the base of the tree closely matching where the pine needles ended.  I was elated. I felt as though I had experienced an ethereal astronomical event.  I kept shooting, hardly containing my enthusiasm.  The other participants and instructors slowly began to notice the moon rise, and eventually joined me.  It was still magical, watching the moon and looking for different compositions, but they had missed the timing of that fleeting moment.

"The landscape is like being there with a powerful personality and I'm searching... to make that portrait come across as meaningfully as possible." - Galen Rowell


Galen's tree was replete with that personality.   The timing and light convened to put this experience at the top of the list in meaningful experiences for me.  I hope that the feeling in these images will resonate, and serve as an homage to the late great Galen Rowell, and convey the essence of his spirit.