Since I got my DSLR I've been dying to get to Sedona and photograph the red rock country at night. I loaded up the gear and dogs into the VW bus and started to hit the major land marks. The plan was to grab the tripod, makes some star trails, then find a camping spot out of city limits in the national forest. The first stop was Castle Rock. I set up the tripod right in the empty parking lot. A light storm had recently passed and the clouds just began to clear. 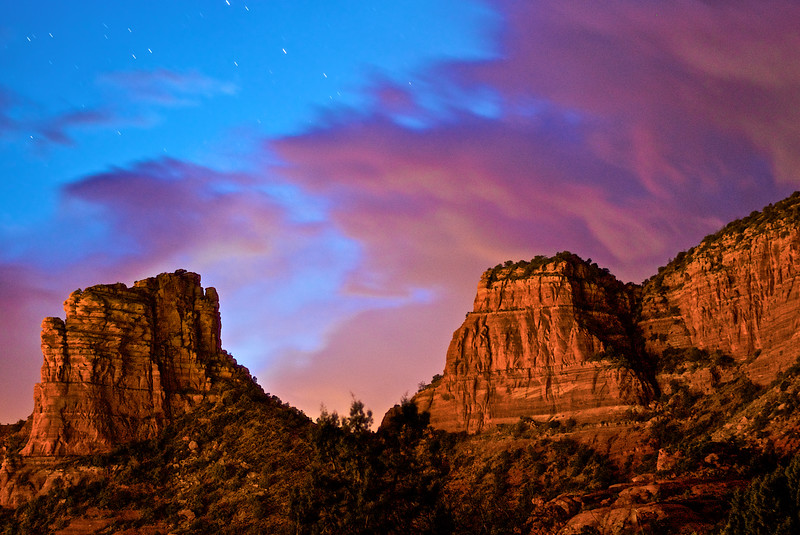 Normally a clear night is preferrable to a cloudy one, but one takes the time one has. I have found that any weather makes for more interesting photos. Here there was still some color in the sky, and the lights of Sedona were reflecting off the clouds. The light illuminating the front of Castle Rock is ambient light from car headlamps and the Village of Oak Creek. The shutter was left open for 30s, ISO 200, at f2.0 using some old legacy glass, the Vivitar 28mm f2.0. The next shot here, I just turned around toward Courthouse Butte and took three 10 minute exposures. I stacked them in Photoshop afterward to align the startrails. The high clouds made them a bit dotted by diminishing the light as they passed. The next two were taken from the parking lots of each land mark, Bell Rock and Capitol Butte.

They were just some quick 30s exposures. The last photo here was taken of Cathedral Rock, but not from the Red Rock Crossing area, which is where most photos are taken of the landmark.
I found an out of the way dirt road and perched there for about an hour, dogs waiting patiently in the van.

Here you can see Cathedral Rock, and the lights of Cottonwood reflecting off the clouds. Again it was 3 ten minute exposures with the same settings as Courthouse Butte. This concluded my foray, after which I drove out of town to the national forest to camp out in the VW bus for the rest of the evening (about 11pm).